We have so many wonderful customers who also love Emoji! One of our customers took Emoji on a trip to Europe and sent us these wonderful photos of their trip. If you are interested in taking Emoji on a trip, you can request a Panda by emailing Sales@BambooSolutions.com with your name and address.

“As promised, Emoji had a wonderful time in Europe. I sure hope he is 21 as I gave him Pina coladas and took him gambling :)” Here is Emoji waiting to take off for Amsterdam from Reykjavik. Once we made it to the ship, Emoji really wanted a Pina Colada (even though it was pretty cold outside) After a fun day in Inverness, Scotland, here is Emoji glowing over his exciting beer purchase. 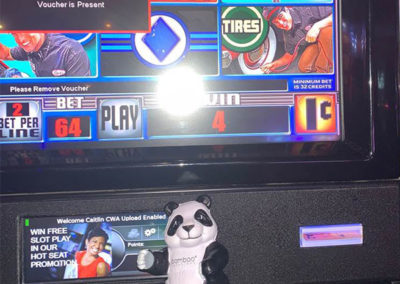 On our day at sea, Emoji and I hit up the casino. Not big winners, but we weren’t big losers either J. Here he is after we cashed out. We then went up to the deck and watched the sunset. But first, Emoji checked himself out in the elevator mirror.