The inaugural Gov 2.0 Expo took place at the Washington Convention Center in our nation's capital May 25-27, and was co-produced by O'Reilly Media and UBM TechWeb.  The 3-day event drew hundreds of speakers, attendees, vendors and citizens.

President Obama has called for the government to be more collaborative, open and transparent to its citizens.  This exciting event was a meeting of some of the brilliant minds that are creating the new landscape for harnessing the technologies that will enrich and advance all government initiatives.  The Open Government directive will ultimately make the government more transparent, participatory and collaborative.  Citizens are already adopting the technology that allows them an unprecedented civic voice and the ability to reach through the 'red tape' to the influencers and policy makers via online channels, to an extent never before seen in history. 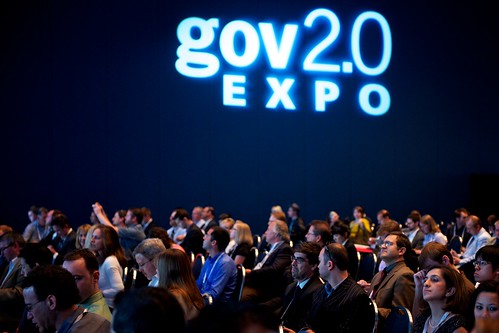 Keynote sessions were two hours in length, and were broken into many mini-segments, allowing speakers to cover a wide variety of topics.  On Wednesday morning, the Keynote session was kicked off by Tim O'Reilly who spoke about "Government as the Platform for Greatness." 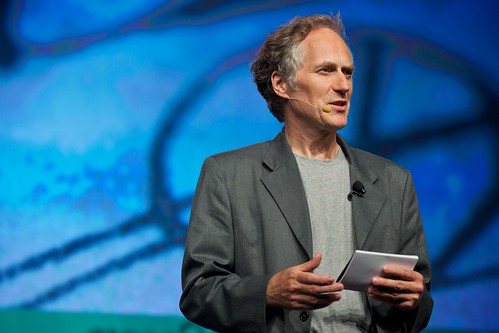 The entire event was packed with sessions that were fascinating, thought provoking, discussion-stimulating, and exciting.  The main tracks were Open Data and Web Services, Social Networks and Collaboration, Agile Government, Cloud Computing and Security, and Emerging Technologies.  I attended this event to specifically attend two sessions I had read about online prior to the event: How Governments are Harnessing the Value of Community and Collaborative Technologies: Discussions and Real Life Stories, by Rob Howard, founder of the enterprise collaboration community software company Telligent.  The second session that had caught my attention in advance was Innovations in Gov 2.0 by Walton Smith and Grant McLaughlin.  Both of these gentlemen are principals at Booz Allen Hamilton. These two sessions were both presented on Wednesday the 26th and, as it turned out, the sessions were related in their content, as the two companies had worked together to provide a collaborative platform called APAN  to collaborate and coordinate relief efforts to aid with the crisis in Haiti.

In Rob Howard's session, I learned that the Telligent platform that was used to develop the APAN system, and that part of the platform included SharePoint technology.

In the wake of Hurricane Katrina, many agencies responded to help but there wasn't any clear centralization of information.  The efforts were scattered and the information management process was a failure.  Also, as in past relief efforts, many groups are mobilized quickly and then disbanded after the relief has concluded.  There is no data-capture of what worked, what went wrong, and no documentation of lessons learned to put to use in the next relief effort.  The U.S. Government recognized this, and saw the need for a platform for data organization and assimilation of relief efforts.  Disaster coordination was needed.  U.S. Southern Command needed a project and borrowed APAN (formerly Asia Pacific Advanced Network, later renamed All Partners Access Network or APAN) from U.S. Pacific Command.  The government turned to Telligent  to use their software as the primary collaboration and community portal for exchange of declassified information, and to Booz Allen Hamilton for their Government 2.0 experience and leadership in building online communities.  Wikis, blogs, forums, and file-sharing were all used to coordinate disaster relief, as well as offer a mobile experience.  The team working on APAN was conducting a beta demo of it down in Florida this past January, and the next day the earthquake hit Haiti. As a result, the team went live with APAN a full ten months ahead of schedule.

The relief effort for Haiti quickly became an international effort.  There were over 300 international aid groups participating.  With the use of APAN, communications about food, shelter, medical supplies, water, situational assessment, power and fuel, search and rescue, logistics and chain of command became organized in the Web portal and the flow of information began.  People who were stranded underneath the rubble with cell phones were texting their families as to their location at the time of the earthquake.  Families were then contacting APAN to alert search and rescue teams as to the last known whereabouts of their loved ones.  Hospitals that had beds available were alerting rescue teams so they could bring the injured for care.  And, for one of the first known times, Global Hawk classified aircraft were used for aerial reconnaissance for an unclassified use – photographing the devastated area.   Over 3,500 photos were loaded into APAN's image library so teams could analyze travel routes to hospitals, see hot spots where there was violence and crime occurring, see where areas were improving – especially roads and ingress areas – and what areas still needed aid.  All of this information being captured was then stored, indexed, searchable and re-discoverable.

And the help poured in from around the world, as Grant cited one example in his presentation.  Workers on the ground sent out an alert that they needed radios immediately.  The request was posted on APAN and the Canadian government jumped into the discussion saying they and had just decommissioned a particular style of radio and had 6,000 of them to send.  They requested assistance in getting the radios to Haiti.  Another group got on and said they could get the radios from Canada to Florida, but needed a hand getting them from Florida to Haiti.  A third group got the radios to Haiti, and within 72 hours, the radios were in hand where they were desperately needed, and had arrived without cost to Haiti and the relief effort.

And as for the mobile effort by the ground forces, the team at Booz Allen Hamilton had built a fantastic app – that was almost too good for the conditions.  As Walton said, the feedback came from users who barely had coverage and time to view things that took a long time to load or to navigate to.  They needed a stripped down basic version for immediate response communication.  They took the feedback, ripped out the existing APAN mobile and re-launched the mobile interface 36 hours later based on user feedback, proving a huge success.

Compared to Katrina, Haiti was a tremendous relief success story.  There is an excellent Department of Defense APAN Video which recaps the story in pictures and is available for viewing on Telligent's site.

As the conference wrapped up, and I stepped out of the convention center into the view of the monuments on the cusp of the Memorial Day weekend, I couldn't help but feel a patriotic exhilaration that our government and private enterprises are coming together to create an open government and to architect, activate and deploy technology in ways that improve and save lives everywhere.

Bamboo Nation gratefully acknowledges James Duncan Davidson for the use of his Gov 2.0 Expo photos.